You have probably all heard the old saying “Luck is where opportunity meets hard work.” Late this afternoon in a spartan stairwell in downtown Los Angeles, a combination of luck, opportunity and hard work came together in brilliant fashion. At approximately 6:24 PM, I burst into the golden light of sunset over the San Gabriel Mountains and the glittering skyline of L.A. I stood for a brief moment atop the US Bank Tower, 1,018 feet above the street from which I had come minutes earlier. Seventy-Five storeys, 1,500 steps = 1,500 stories. Fifteen hundred opportunities to see what I am made of. 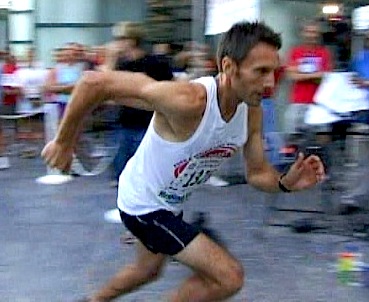 At 6:24 PM I was made of Jello. My legs quickly buckled and I hit the cement hard. Every cell in my body screamed in agony, but at the same time I was filled with a sense of profound elation. I had given it my all on each step. I chose victory in each stride. I had done my best. The voices of “quit”, “defeat” and “I can’t take any more” were strangely absent in the tower. The voices were replaced by choices – Make every step count – a victory here could impact the lives of many people – This race was bigger than me.

In every tower race prior to this one, I had run from a place of fear. I ran like an injured animal being chased by a predator and fearing for it’s life. I was afraid of these races, I was afraid of the extreme pain. I ran to prove a point, I ran to please you, I ran to make you proud. On this day, I simply ran. The knowledge that #2 in the US, Tommy Coleman was starting directly in front of me and #1 in the US (NEVER beaten in the US from 1996 – 2008) Terry Purcell was starting right behind me, was of no impact. I ran my own race and at my own pace.

At 6:29 PM I rolled over and tried to get up. A few EMT’s helped me to my feet after several failed attempts to have my own legs do the work for me. That’s when I noticed the camera in my face. I had forgotten that the Food Network was filming this epic battle. I had forgotten that the wireless mic taped to my hip was picking up every peep and grunt I made in the tower. I was grateful for that lapse in memory.

The orangey golden light that bathed us was surreal. I sat down on a steel girder between Terry and Tommy. We shared embraces and congratulated each other on making it to the top. Other racers kept streaming through the door and onto the roof. I observed their legs buckling, listened to their closed off airways rasping and took in the grimaces on their faces. They were all heros.

Someone asked me what my time was. I hadn’t looked yet. Last year I narrowly won this race in a time of 10:01. I had secretly hoped that my new level of fitness would give me a shot of breaking the course record of 9:46. The glass plate on my watch glowed orange in the light as I peered through the reflection to see my time. For a moment, the world stopped turning. My watch read 9:32. I asked Tommy what his time was, he said “9:40”. Something began to bubble in me, but I hesitated in asking Terry what he had clocked. Finally I got up the courage and asked. “It looks like you won” he said, “I did 9:35”. The bubbling feeling quickly vanished and a sense of bewilderment took it’s place. I didn’t quite know what to do with the information I had just been given. Did a raw vegan at the age of 40 just best the two most dominant stair climb racers in the history of the sport and break the course record in the process? Did I just finish ahead of the man who’s never been beaten? Did this really just happen? Was all of this just captured on national TV???? All three of our times were below the course record. What an honor to compete with these men at the top of their game and come out on top. Does this make me the best stair climber in the country? No. That’s an honor that I will have to work long and hard to achieve, but this is a great step in that direction. I have the greatest respect for Terry and Tommy and have watched their performances with awe for the past several years. These men are still tops in the sport, and they are still the men to beat in any race they enter.