Van Orden Rises to the Top at the U.S. Mountain Running Championships

North Conway, NH (June 26th, 2011) – Top runners from across the country converged on this small New Hampshire town on Sunday to compete in the U.S. Mountain Running Championships. Up for grabs was an all expenses paid trip for the best six men and top four women to represent the United States in the World Mountain Running Championships to be held in Tirana, Albania on September 11th. Trail running superstar Max King from Bend, Oregon proved that he is not only the best trail runner in the U.S., but he is also the best mountain runner in the States as well, beating 2009 U.S. Champion Joe Gray from Lakewood, Washington by 1 minute and 10 seconds.  King’s time of 42 minutes and 21 seconds over the 7.5 mile course breaks down to a pace of less than six minutes per mile on a course that climbed over one thousand eight hundred feet. In the women’s field, new mom Kasey Enman from Huntington, Vermont, dominated a field that included several previous national champions by one minute and forty-six seconds. 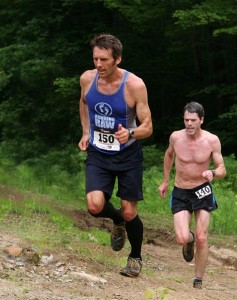 In the Masters field, Bennington, Vermont runner Tim Van Orden, again proved that he is the best trail and mountain runner in the U.S. over the age of 40 as he won his sixth U.S. Masters title in the past twelve months. Van Orden placed 15th overall in the open field, and finished as the top Vermonter in the race. But Van Orden’s victory did not come easily. He dueled back and forth the entire race with 41 year old Todd Callaghan of Beverly, Massachusetts, until finally sprinting ahead in the final quarter mile. “Todd and I ran side by side for most of the race. Being neck and neck like that really pushed both of us to great performances.” Said Van Orden. “I could hear from his breathing that he was in a lot of pain, but he wouldn’t quit. I was going to throw up on every uphill section, but I couldn’t quit either. We brought out the best in each other.” he added.

Competitors were faced with three, 2.5 mile loops that ran up and down the ski trails at Cranmore Mountain Ski Resort in North Conway. Each loop included over six hundred feet of climbing and equal amounts of steep descent.

“The course was really challenging.” Said Van Orden. “Your legs are wasted when you get to the top of the climb and there is no recovery because you quickly transition to a screaming downhill at free-fall speed for a mile. Then we had to do it all over again two more times. People were really suffering on the third lap.” Said Van Orden.

Several runners pulled out of the race due to injuries sustained on the often dangerous downhill sections. Shaftsbury, Vermont native and 2009 women’s U.S. champion Chris Lundy, succumbed to injury on the first lap and was forced out of the running.

5 Responses to Van Orden Rises to the Top at the U.S. Mountain Running Championships