VanOrden wins 7th US Masters Title in the Marathon

Neither rain, nor sleet, nor snow could stop the competitors at the 2011 U.S. Trail Marathon Championships on Saturday. A record number of participants braved the weather and the terrain, including Bennington resident Tim Van Orden. Capping a stellar year on the trails, Van Orden, 43, raced to his seventh U.S. Masters Trail Running victory and a sixth place overall finish. Van Orden’s time of 2 hours 54 minutes and 24 seconds was over a minute ahead of the next Masters (40 and over) runner, Neil Olson from Central Point, Ore. “I’m really surprised with the win” said Van Orden. “I went for it early on and paid the price halfway. The last ten miles were pure will and adrenaline. I ran beyond my abilities today” he added.

The course, known as the ‘Lithia Loop‘, covers 26.2 miles of mountain trails and fire roads through the Siskiyou National Forest in southern Oregon. With a total elevation change of over 8,000 feet, a ten mile climb from the start, eleven miles above 6,000 feet in altitude and a steep five mile downhill to the finish makes this is one of the most difficult marathon courses in the world. In perfect conditions this course is not for the faint of heart, but the conditions were far from perfect.

What began as a light rain at the start built into a full fledged Winter storm as the runners gained in altitude. “It started snowing at mile five” said Van Orden “then it became a blizzard with howling winds and near white out conditions at mile ten. My eyes were stinging so badly from the freezing sleet and snow that I had a hard time making out the trail in front of me.” he added. 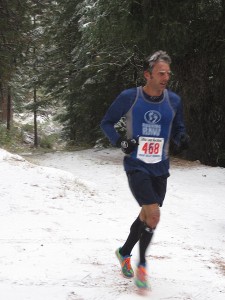 Tim VanOrden runs through the beginning of the snowstorm that engulfed runners in the 2011 U.S. Trail Marathon Championships.

Racers had to navigate through icy trails and several inches of snow for nearly half the race. But this didn’t seem to slow them down. Two-time World Trail Running Champion Max King from Bend, Ore. knocked ten minutes off of his own course record to win his third straight U.S. Trail Marathon Championship. His winning time of 2 hours 31 minutes and 58 seconds is hard to comprehend even for seasoned race veterans. “This is not a flat road race.” Said race director Hal Koerner. “Max ran a time that would win many road marathons, but he did it while running up and down mountains at high altitude on snow and ice.” He continued. King has been training hard for the upcoming 2012 Olympic Trials in the marathon where he hopes to earn a spot on the U.S. Olympic Team.

The women’s race also saw a new course record as Megan Lund-Lizotte, 29, of Basalt, Colo. ran to victory in a time of 3 hours, 3 minutes and 46 seconds. Along with King, Lund-Lizotte will also be competing in the Olympic Marathon Trials in January.

With his sixth place overall finish in the marathon, Van Orden overtook Mario Mendoza, 25, from Cambria, Calif. to become the overall winner of the 2011 USA Trail Championship Series. The series consists of the four U.S. Trail Championsips at 10 kilometers, 15 kilometers, half marathon and marathon plus the U.S. Mountain Running Championships. Van Orden has been the U.S. Masters victor in each of the events and had several top ten overall performances.