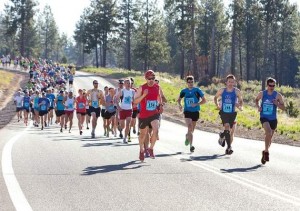 The start of the 2012 U.S. Half Marathon Trail Championships.

Nearly eight hundred runners took on the challenge of the Dirty Half Marathon in Bend on Sunday. For the third year in a row, this race has served as the U.S. Half Marathon Trail Championships. Crystal clear blue skies and temps in the low thirties greeted runners as they barreled down the trail towards the Cascade Mountain Range and views of five snow-capped volcanoes. Thirteen-point-one miles of scenic, winding, single track trail was the proving ground for this event. Race favorite Max King, of Bend, did not disappoint, as he took the lead early and earned his third straight U.S. Championship at this distance in 1:15:48. King was also the 2011 World Trail Running Champion and the 2011 World Mountain Running Champion. Running a strong second was Ron Tibaduiza in 1:16:24. Third place went to Scott Gage in 1:16:52. Fourth through sixth places were a tightly contested battle to the finish, with Mario Mendoza getting the edge at the line in a time of 1:18:48, with Santi Ocariz and Kevin Cave both finishing in 1:18:49. Tim Van Orden, 44, of Bennington, Vermont finished in seventh overall in 1:19:52 and repeated as the U.S. Masters Champion in the event.