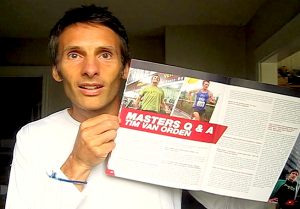 Tim, featured in this issue of Fast Forward

Tim shares some great news! The Running Raw Project was just featured in the USA Track & Field (USATF) quarterly magazine ‘Fast Forward’. Not only is this a huge honor, to be featured in the publication of governing body of running in the United States, but this just happens to be their biggest issue of the last four years – This is the 2012 London Olympics issue!

All of the highlights of the Olympic Games and Team USA are covered in this issue, including all the world records that were set and gold medals won. But, the last two full pages of the magazine are dedicated to Tim and the Running Raw project.

What a huge honor to be featured along side Ashton Eaton, Allyson Felix, Sanya Richards-Ross, Aries Merritt and all of the other top American running stars.

Perhaps the tipping point has been reached… Perhaps the message is finally being heard… Perhaps now other top athletes will read this article and take up the torch of a plant based diet.