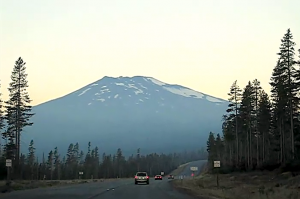 This race really took a lot out of me mentally and physically… So I stepped away from working on this video for a few weeks. But now with a new perspective, I thought I’d put it up.

The USA 50k Trail Running Championships were held on September 22nd, 2012 at Mt. Bachelor in the Cascade Mountains of central Oregon. This race was held in conjunction with the Flagline 50k, put on by Superfit Productions in Bend, Oregon. USA Track & Field holds USA Trail Championships at a wide variety of distances. Over the past 3 years, I have had great success in these championship races from 10k to the marathon, winning nine US Masters titles… But I’ve never done a 50k… and I was really nervous.

Preparing for an ultra marathon (any race longer than 26.2 miles) is a different process, than preparing for shorter races. The main consideration is fueling during the race. Thanks to the input of Robert Yerex, I found a novel way to eat/slurp my fruits and veggies while racing, without creating a big mess – Baby food squeeze packs.

Another important consideration in doing a 50k are the shoes that you’ll wear. Ramping up from a marathon to an ultra marathon, significantly increases the load placed on the feet, tendons, ligaments and joints of the lower leg. Even though this is a trail race, I opted for a lightweight, road racing shoe with lots of forefoot cushion – The Brooks Green Silence. The extra cushion (especially on a course with lots of steep downhills) can keep your legs from suffering too much during the race. The trails in the Bend, Oregon area are quite smooth and leveled out by mountain bikers, so the need for big lugs on the bottom of your shoes are not really necessary for the majority of the races that are held in the Bend area.

To find out how I did, check out the video below.