New Year’s Resolutions – Part I – Warming To The Cold 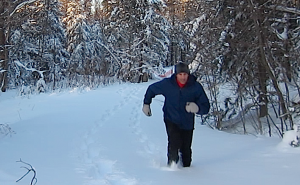 We all have excuses for not getting motivated to exercise when it’s cold outside.

The beginning of a new year always gets people to think about fresh starts and new beginnings. Feeling the accumulated burden of a year’s worth of not so great decisions, many people vow to take back their life in the form of New Year’s Resolutions. The majority of Americans will make a New Year’s Resolution, but only a tiny minority of them will actually follow through and honor their resolution. We can all come up with a million reasons, excuses and justifications for putting our resolutions off until tomorrow, or not seeing them to completion.

So I’ve decided to make a two part video series about New Year’s Resolutions, to help people better understand the mechanisms that underlie them.

In this first video, I talk about one of the biggest excuses for not following through or getting into action this Winter – The cold.

I know this excuse well, because it screams at me every day. But I’ve developed some tools for getting into action, even when it’s below zero outside and the snow is thigh deep.