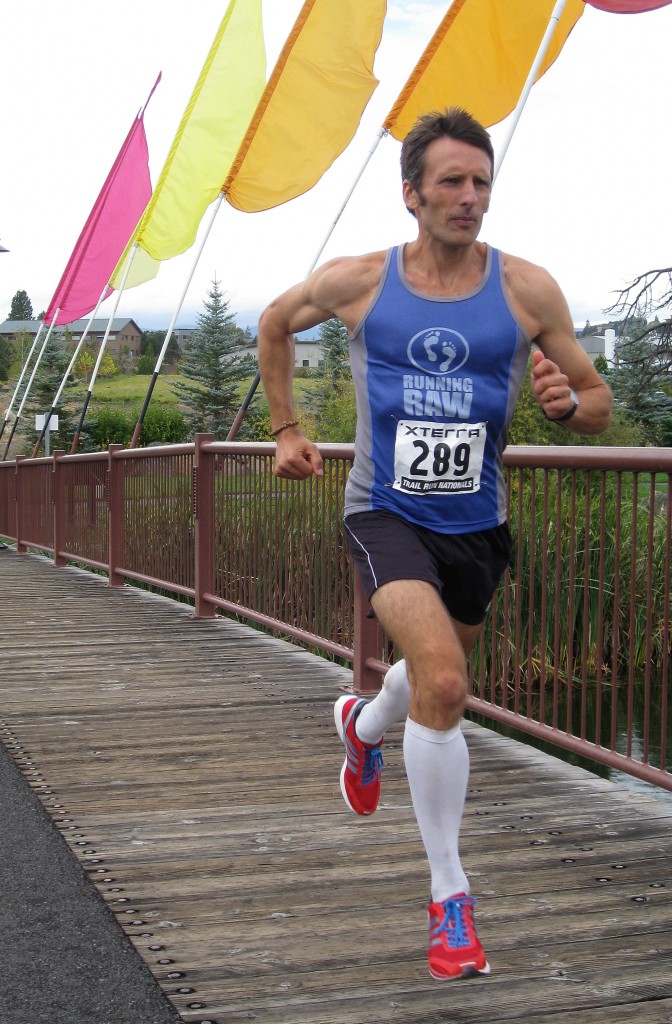 Tim VanOrden of Bennington, VT cruises in to win his 3rd straight US Masters Trail title

Tim VanOrden, 42, of Bennington, Vermont won his third U.S. Masters Trail Running title of the Summer on a scenic 13.99 mile course along the Deschutes River in Bend, Oregon. He now owns U.S. Master’s (40 and over) titles at 10k, 15k and the half marathon. VanOrden’s time of 1 hour, 20 minutes, 8 seconds earned him eighth place overall in the elite field, just 18 seconds shy of a fifth place spot on the podium.

“I previewed the course the day before and I knew it was going to be a lot faster than I like. I prefer bigger climbs and more technical, challenging trails. This race really suited the fast road guys.” Said VanOrden. Despite the deep field of talent in the race, VanOrden rose to the occasion, besting Master’s runner-up Bret Kimple of Portland, Ore. by 2 minutes and 33 seconds.

“I really didn’t think I’d get this one.” Said VanOrden, “My goal was to run 5:50 pace (per mile), but I felt great right out of the gate and found myself running with the lead pack and clocking a 5:18 for the first mile. The pace was comfortable so I just stayed with the lead guys.” He added. VanOrden kept in contact with the lead group for the first 8 miles and 1,100 feet of climbing before the top four began to pull away. “I really surprised myself today. I didn’t know I could run that fast for that long”, said VanOrden.

But VanOrden was not the only three time champion at the event. Overall winner Max King, won his third consecutive XTERRA National Championship, completing the course in 1 hour, 15 minutes, 57 seconds. In addition to his three national titles, King is also the 2008 and 2009 XTERRA World Trail Running Champion. King, who resides in Bend, used his knowledge of the course to break away from the field late in the race.

“When you have good competition and you pull out a win like that, it always feels good, mentally and physically,” said King, 30. “I tried to be relaxed in the first half of the race and see if I could open it up in the second half to get the win, and that’s what I did. It wasn’t easy. This was a very difficult win for me.”

King’s third consecutive XTERRA National Championship victory was his closest. Fellow Oregonian Greg Mitchell and California’s Mario Mendoza pushed King the entire route. Mitchell finished second with a time of 1:16:52. The 55-second margin was the closest any runner has come to King at the XTERRA National Championship race in the past three years. Mitchell had the lead for the first half of the race, but King passed him during a flat section along the Deschutes River with around three miles to go. Mendoza also held the lead for a brief stretch before settling for third place in 1:17:16.

The women’s race was also supposed to be close, but Fleshman ran away during the final miles. For most of the race, Fleshman and Michele Suszek of Colorado ran head to head.

“I just tried to keep pace,” Fleshman said. “Then probably with around 5 (kilometers) left , I really picked up the pace to make it uncomfortable for the other girls in the race. My specialty is 5k, so once I knew there was 5k left, I felt comfortable picking it up.”

“She was right behind me, then she got ahead at the 10-mile mark,” Suszek said of Fleshman. “Then we hit the flat stuff and she was gone. I tried, but she’s really fast.”

Suszek, 28, was also fast as she finished more than two minutes ahead of third-place Mary Colburn (1:29:18) of Culver City, Calif.

More than 400 runners from around the world participated in the race. The runners were greeted by light rain and temperatures in the 50s.

King and Fleshman each received $1,000 and roundtrip airfares to Hawaii courtesy of Hawaiian Airlines. They can use the airfares to compete at the XTERRA Trail Run World Championship at Kualoa Ranch, Oahu, Hawaii, on Dec. 5.

In addition to the overall titles, 24 age-group national champions were crowned. Zoe Allen from Hillsboro, Ore., who is 7 and the youngest runner to ever compete in the XTERRA Nationals, finished in 3:03:37 to win the female 9-younger division.

“It’s been a long few months of training, travel and competition” Said VanOrden. “When it’s over in December, I’m going to sleep for weeks.”