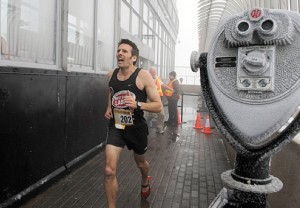 NEW YORK CITY, NY (February 1st, 2011) – Tim VanOrden, 42, of Bennington, Vermont rose to the occasion at the 34th running of the Empire State Building Run Up on Tuesday morning with an exceptional 4th place finish. VanOrden was the top American finisher and won the Masters division for the second straight year, earning him the title of the ‘World’s fastest stair climber over the age of forty’. This was VanOrden’s best effort in the Run Up, shaving 44 seconds off of his 11th place finish time in 2010. “I don’t have buildings to train in like most of the other guys, so I have to get creative” Said VanOrden. “I’ve been running up mountains in snowshoes, cross country skiing, running in deep snow with big Winter boots, rowing machine, and doing a lot of road running on top of that.” he added. This training regimen seems to have paid off as VanOrden scaled the 86 floors and 1,576 steps of New York’s tallest building in a time of 11 minutes and 35 seconds. His time was just 6 seconds shy of Germany’s Christain Riedl in 3rd place (11:29) and only 10 seconds back from Belgium’s Omar Bekkali in 2nd place (11:25). Germany’s twenty six year old stair climbing phenom Thomas Dold, won his 6th consecutive ESB Run Up in an ear popping time of 10 minutes and 10 seconds. Dold now holds the record for the most wins in this race. Rounding out the top five was two time Sears Tower stair climb champion Jesse Berg out of Chicago in a time of 11 minutes 46 seconds.

VanOrden seemed quite surprised when asked about his result “I’ve been dreaming of a top five finish, but actually doing it hasn’t quite sunk in yet” He said. “There comes a point in every stair race where you can’t endure the pain anymore and the building breaks you, mentally and physically. That’s where the real race begins. Fortunately for me today, that didn’t happen until I reached the finish line.” He added.

Hosted by New York Road Runners, the Empire State Building Run Up serves as the unofficial world championships for the sport of stair climbing. The race is known as much for it’s controversial and often bloody mass start as it is for the grueling 86 story climb that competitors must endure. Top athletes from around the world apply to gain entry into this invitation only race, but most are rejected. VanOrden earned a berth in this year’s climb after being named the 2010 USA masters mountain runner of the year, and finishing in 7th place in the 2010 stair climbing world cup standings.

The women’s race was won by world champion rower Alice McNamara from Melbourne, Australia in a time of 13 minutes and 3 seconds.

Full results can be seen at the NYRR website.